It has become a ritual.  Every morning.

I stumble down, half-asleep, from our upstairs balcony and step as silently as possible into the kitchen to turn on the stove to make my espresso.  No luck!  My mother-in-law, ears like a hawk, ambushes me.  “What do you want for lunch?”

Lunch!!?  I haven’t even had my coffee, never mind breakfast, and she asks me what I want for lunch!  My head and my stomach won’t start communicating with each other for at least another hour!  Good grief,  It’s Sunday morning and I’m still not sure why I’m up this early.

I should be prepared for this by now.  One day, I’m going to prepare a menu the evening before.  “Mmmm” I’ll pretend.  “let me think.  How about fried “alici” followed by chicken cacciatora with roasted peppers and carrots?…..oh and maybe some tiramisù for dessert.” That’ll soon put a stop to it!  I never do and probably never will. 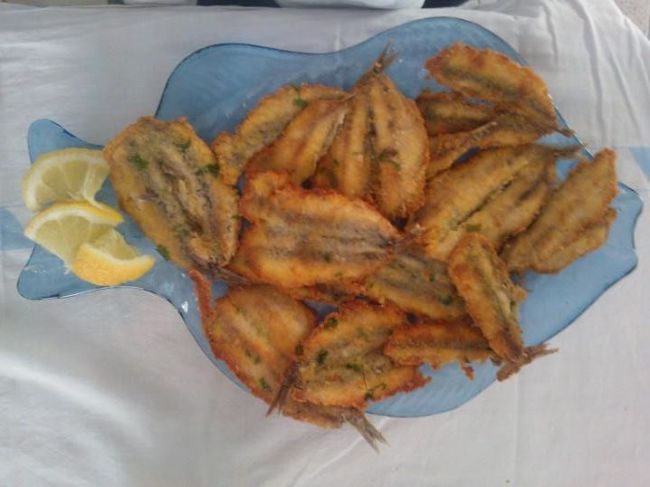 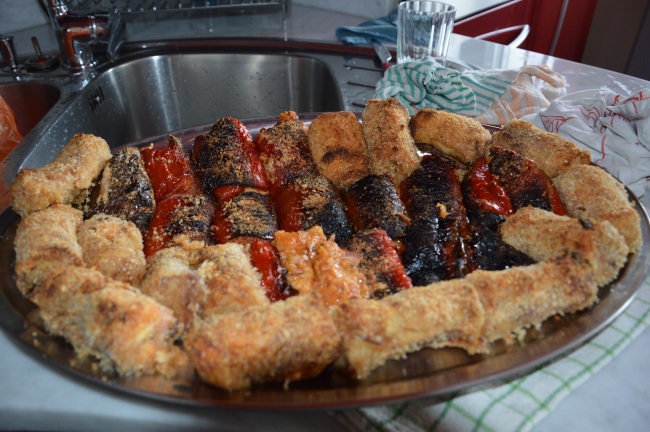 It’s then I remember why I’m up early.  I have to meet some people for aperitivo (some rather filling arancini, potato croquettes and a glass of prosecco) at Cameron’s Cafè* to discuss a quote for some finishing work we have to do on the house.

“Yea we got some complimentary tickets for a club last night, down near the beach, so it was a late night.”  (this has a bearing later if you stay with me here)

We chew the necessary cud before getting down to business, it’s always polite.

“So.” They ask.  “What are you having for lunch?  Marco here is having Lasagne, what about you?”

We continue to talk about the best way to cook these for a while before we turn to the project…..

Later, business done and start-date approved, we shake hands and kiss cheeks.  “Buon pranzo” (have a good lunch) we say, as is the custom.  I’m feeling a little full already.

It’s on the way back in the car that I begin to think about this.  How much is a cultural identity defined by our small talk?  In some parts of the world it’s the weather, in others the latest sports results but here in Calabria it is most definitely….food.  Even in Rome!  The only time I’ve ever caught a taxi in Italy was in Rome and within a second or two of climbing into the vehicle the question was…”where are you eating this evening?”  If a taxi driver’s opening gambit isn’t the cultural compass of a nation then I don’t what is.

As I write this post I’ve just woken from a nice siesta.  Not, as some would think because of the hot weather but, as winter siestas bear witness, LUNCH!  The Italians are fiercely proud of their cuisine, quite justifiably in my humble opinion.  But why… is the really interesting question.

Suggest a nice French Chablis and they’ll scoff.  Present aubergines at the table in December and they’ll know they’re not fresh.  Strawberries in July are not something you’d use and even the tomato sauce we use for our pasta in January is prepared, jarred and sealed the previous September, for natural preservation….no additives, well except for the fresh basil.  Supermarket fruit and vegetables are greeted with healthy suspicion. 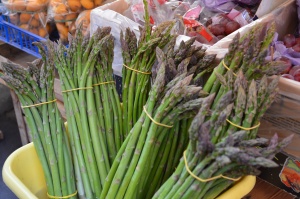 As standard bearers of real food, the Italians still have numerous private fruit-and-vegetable shops, butchers, and fishmongers on the high street……the supermarket exists but can’t compete, at least not when it comes to freshness…….We don’t even pay more.  Our nearest city is Reggio Calabria and even with a population of over 200,000 there’s only one McDonalds.  Bromley has at least six similar “restaurants” just in one street.  The most wonderful thing however, is the non-homogenised regional menu.  Let me take you in a helicopter and drop you blindfolded into any region in Italy and by food alone you can identify your location.  Where else in an increasingly corporate Europe could you do this!

PS. Remember the nightclub I mentioned?  It’s a sign of getting older when you go late-night clubbing and the only pill you’re likely to pop is one for indigestion!!!  Food again! 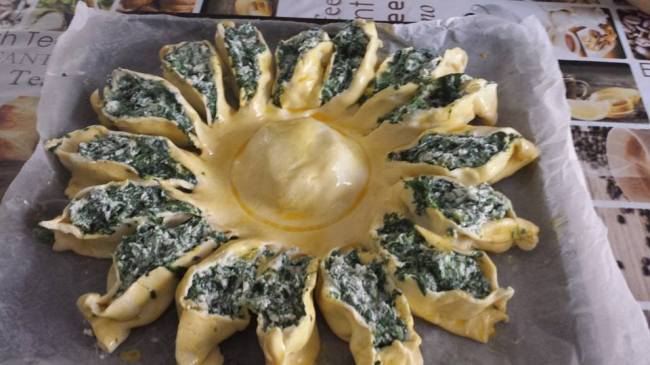 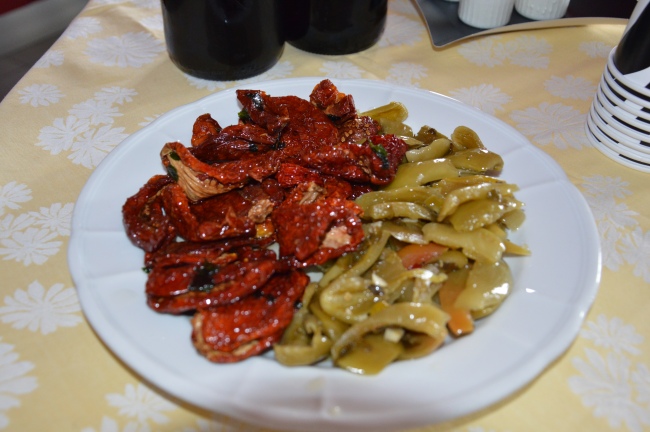 For some serious recipes please check out:

Tradition had always dictated that we spend Mayday in the mountains with Uncle Nino and the family – the usual thirty-odd waifs and strays that settle along the long table for homemade bread, pizza, pasta and anything else you care to collect from the farm, as summer beckons.  But, this year, regretfully no.  The mountains are unusually cool at the moment and hey, we’ve got wind of the first open-air music fest of the season…at one of the much-nearer and considerably warmer surfing clubs on Punta Pellaro Beach, the aptly-named Free Spirits.

When we arrived in the early afternoon, we approached from the beach-side and the place was already buzzing.  A number of very large tepees were casually placed across the sand, on wooden bases, covered with scatter cushions and Moroccan lamps which only added to the distinct Sahara feel that you often get in the Southern Med.   The  BBQ was already fired-up, spitting and hissing the sweet smell of Italian sausages and red onion while the shelves of the fridges behind the bar were being rapidly emptied of their chilled elixir.  “Grab a couple of beers and I’ll see you by the sound-desk.”  Said Maria, shoving me in the right direction.  Maria was heading towards Teresa Mascianà, the opening act and our main reason for coming.

By the time I’d queued, bought the refreshments and weaved my way back, avoiding the psychedelic surf boards that were passing through the crowd on their route to the sea, the sound check was complete.  Warm greetings from familiar faces around the stage made me feel as if I belonged at last…..one of the crew.  I settled down on the sand, laid back and sighed.  The sound of “Good Vibrations” meandered through my head.  No need to wonder why!

The crowd grew….and grew.  Some people slipped off only to come back with more.  Word was getting round.  Teresa and The Organ Donors fired up and fairly ripped through their set. This band was on-song.  The mood was having its effect, with the guitarist unchained from his effects board and Enzo, with his red bass looking like a toy against his big frame, moved and generated gleeful energy.  Faultlessly smooth and inspiring, the audience applauded with enthusiasm and appreciation.  It was the audience’s reaction to the following acts however, that really took me by surprise. 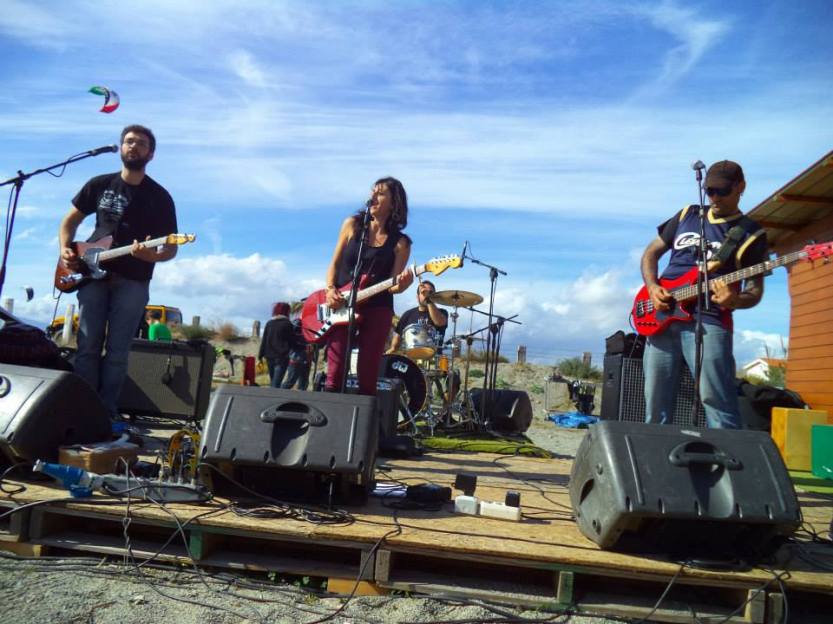 Teresa had taken over “desk” duties as her experience was going to be sorely tested by a local folk group, “Skunchiuruti” (skoonquirooty) which might translate as “someone illogical” or “ploughs their own furrow.”  Typically these bands of merry men will vary in numbers and in instrument choice as the performance goes on, giving the appearance of total chaos……swapping positions, a clattering of mics, (una due, una due) the tuning and retuning of ancient stringed-things, and the inevitable delays between one song and the next.  The simplicity of this type of music (usually just two chords) means that virtually anyone can join in…. and invariably they do.  After a couple of tentative starts the group got going…….like a train.  Suddenly, we witnessed something that would have been unthinkable even five years ago, a time when most young people would have turned a lofty nose down at this sort of music.  En masse, the audience were up on their feet….. dancing, spinning, reeling like a Scottish Ceilidh on speed……on the beach! Very strange! 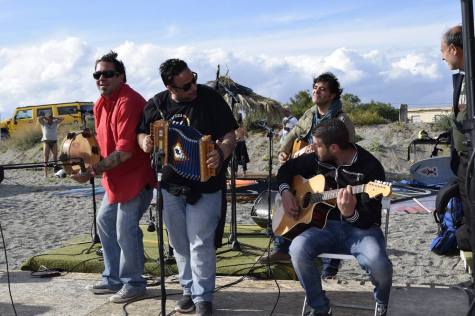 Whether it was the sun, the beer or the simple joy of a mid-week holiday I couldn’t say, but there I was, up and spinning with the best of them.  The music was infectious…..it must have been because dancing on sand is not the easiest thing to do, especially when you’re just recovering from a badly sprained ankle.  All the while, surf boards shuffled back and forth through the mayhem to perform their own pas de deux on the sea.  Multi-coloured wind kites swooped and rallied across the sky blue….airborne dancers round invisible maypoles. 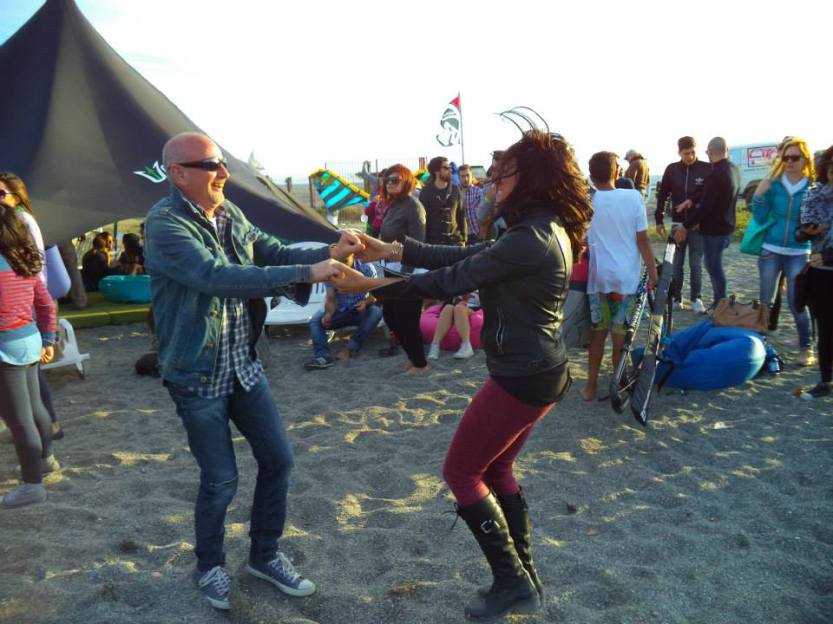 This was guilt-free celebration, and not organised to the nearest Monday, just a day of hope….on the day it should. So, I hope you’ll take a little time to listen to those who made the day the perfect overture to summer 2014.