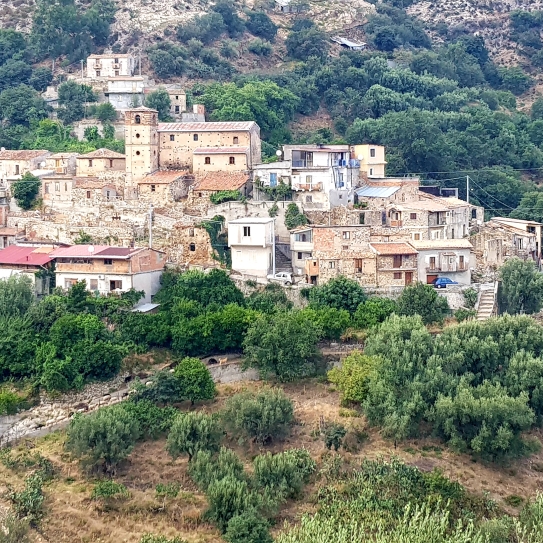 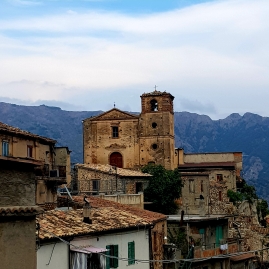 It was during one of my most fascinating days in Calabria that I’ve finally begun to understand the cultural differences that make up a nation we call Italy. The differences between the north, the central belt and the south. Roman, Spanish, Norman, Arab….and Greek.

Here in the South I realise that their Greek origins are a real source of pride. Though many wish to see themselves as more modern and wishing to leave it behind, it’s there…deep inside, like it or not!

Visiting Gallicianò in the heart of the Aspromonte National Park, is a mountain journey which comes close to finding the source of Calabria.  600 metres above sea level, a very small community of about 60 people sit high over the valleys and still speak an ancient Greek language, not modern Greek but the classical, the original….spoken long before Christ. Yes there is a slight nuance of Byzantine now but the language remains virtually untouched. Something you might expect more from a tribe in the deepest Amazon.

Our well-informed and enthusiastic local guides help us understand the nature of the place, from the functioning Orthodox church of Panaghia Tis Elladas (Madonna di Grecia), so small and pretty that you might just change belief to attend, to the 16th century Christian chapel that has decided to adapt, but not shake off its Greek origins….Children of the corn!  The walk through the village could take but a few minutes without a guide, but you need a couple of hours if you want to learn something.  And there is much to learn.  The talks are fascinating, the history compelling.

We finally settle in the local Taverna (there is another somewhere below we are told) as the sun sets and the lights dance like candles in the still warm air.  Very local food – because you wouldn’t want to spend an hour down the twisting roads to find the nearest supermarket, and another hour to come back- is dispensed along our long table of fellow travellers in large appealing quantities with litre after litre of excellent hill-top wine.  Roasted peppers, goats cheese, bruschetta, rice, capicollo, bread and fritelle (fried courgetter flowers) is laid down, dish after dish.  The unspoilt taste of nature!

I heard what sounded like firework explosions or loud gunshots in the distance.   Having heard it many times before in the hills above where we live and taken it to be sportsmen out for game…I am now better informed.  It is small explosives, set off now and then, to keep the wolves from coming too near the sheep!  The wild is never too far away!  You live and learn.

Thinking the day was over we climbed back into our mini-vans, fed and feeling replete. Without a moon we were enveloped in almost complete darkness.  But this was only the beginning of the journey!  We climbed another 300 metres to about the equivalent height of Ben Nevis and eventually found ourselves in the middle of a dense pine forest (Monte Scafi).  We started to make our way with powerful torches (not a glimpse of human interference or moon in the sky).  Only when we had walked through the canopy of pine scent, crunched through dried forest needles and had reached a large clearing were we encouraged to switch off our lights.

Not since the very north of Scotland have I ever seen such a sky!  Our group fell silent!  The stars were as clear and close to our noses as if magnified, sheer uncountable brilliance!  Wow!  A shooting star….and another! Streaking across our universe, the light show had started.

I think we all went back to our vehicles buzzing with incredulity, thinking our guides couldn’t top that!  We were wrong!  Next stop, slightly further up the mountain was to another village, the highest in Aspromonte, Roccaforte del Greco. We stopped once again, disembarked and were taken up to a balcony of people waiting for their host to begin.  Centre stage was a huge electronic telescope, pointing to the sky like a massive cannon and our host for the next hour.

We were treated to a guide round the galaxies, laser pick-outs of constellations and for me…my first “live” view of Saturn’s rings in technicolour….only interrupted by rude shooting stars which seemed to come from all directions, like the bats that joined the fun from….yes…the belfry next door!

Our big lives made small, our small lives forged by time. I know a little more now but the Universe however, is still all Greek to me!