As a (past) amateur sailor of the lochs and islands that abound in the gulf stream that sweeps round the Scottish west coast, I can only gaze at the Med and wonder. With this climate of endless blue skies and friendly warm winds, surrounded by matchless scenery, why do I not see far more white sails tack and beat their way round Sicily, heading for the clear sandy lagoons and bays to anchor overnight before exploring the Aeolian Islands? Why no smell of bacon and eggs wafting across the flat-calm of the early morning to the shore?

“I have my own theory,” a keen local dingy sailor tells me. “Ever since the Tsunami of 1908 the people of Reggio and Messina have a deep mistrust of the sea. They’re more comfortable as fearless landlubbers and prefer something a little higher…generally about a thousand meters higher.”

When I think about it he’s probably right, the mountains, even the very high ones, are not at all like the vast soulful wilderness of the western Cairngorms. No, they are pretty well smattered with towns and villages, all within a goat’s scramble of each other, even along ridges three times higher than Ben Nevis.

There is, however one group for whom the sea brings no fear, only fun. You know they’re active long before you actually get sight of the water, their multi-coloured stripes and emblems snake through the air against the clear sky telling you that you’ve arrived…in KiteSurf paradise. Amazingly it turns out that my home town, Pellaro, happens to be its epicentre.

“Pellaro Point probably has the best kite surfing conditions in Europe, and certainly one of the best in the world,” says Agostino Martino, proprietor of the NewKiteZone surf club. “The wind is always to land so it’s got the best and safest conditions for learning the sport and having good strong winds makes it exciting for the more experienced surfers.”

He explains, as we watch some of his instructors help three or four young female students get to grips with their boards and lines. Agostino has invited me down for a free lesson after having helped him translate a press release for the 4th annual Continent-Island Kite and Wind-Surf race between the mainland and Sicily. I already knew that five years ago there had been nothing along this wide stretch of sand apart from a few die-hard (and possibly extreme) sportsmen, yet now here was a thriving school and club.

“So how did it turn from a hobby into all this?” I asked.

“It’s an odd story really,” he mused. “I was working in Rome as a computer consultant and doing quite well, to be honest. Well, one day after work I decided to go kite-surfing and headed down to the sea with my girlfriend and, after getting all the kit out and ready, I discovered I’d left my control bar (for the kite) at home. So I asked Stefania to stay and look after the equipment while I nipped back home to get it. Two and a half hours later I got back through the Rome traffic to find a very stormy looking girlfriend and no wind. That was it for me! I took a year’s sabbatical and tried to work out what I wanted to do while I did as much kite-surfing as I could on the way…..It wasn’t long before the penny dropped.”

Agostino takes a few minutes to go and help some surfers land their kites while I watch the action on the water. There’s no doubt that it’s a fascinating sight. There were kiters weaving in and out of the wind surfers, some of them taking off and doing acrobatics in the air while the beginners were just concentrating on making steady progress up and down the shore line. The sky was full of colour and against the backdrop of Etna in mid-eruption it was easy to see how you might become addicted to this kind of buzz.

“We set up a hut on the beach here at Pellaro and took from there really,” continues Agostino after a few minutes. “ We got our IKO teaching accreditation and didn’t have to look far for our first students since the area already had a reputation in Italy for its naturally ideal conditions. We had people coming from Florence to Milan with a few from northern Europe at that point.”

“So how did the school develop so quickly then?”

“Well, the water’s a good couple of degrees warmer than most places ten months of the year which means there’s virtually all-year-round surfing so we also started getting more and more people coming wanting to train to be instructors, from as far away as Mexico. In fact,” he added modestly, “We’ve trained more than 120 instructors in the last four years. We’re also the only club I know of in Europe using a new technique developed by an Argentine surfer where we use short lines to make it much easier for beginners. It means we can get more students learning at the same time without worrying about the wind carrying them off anywhere.”

“Is it mostly guys you get coming?” I asked spying Gino, the barrista from Piper cafe, try a couple of mid-air spins a few meters above the waves.

“No, not at all! In fact this year until spring we had practically all girls, even when it was quite chilly out there. There’s me wrapped up in hoods and fleeces on the shore while they’re out on the sea in shorts and tee shirts…don’t know how they do it, tougher than me that’s for sure.”

He shudders at the memory.

We withdraw to the Pizza Lido next to the club for a cooling beer and some shade to continue our chat.

“We often have parties or BBQ’s after lessons here,” Agostino tells me, “Always a good crowd.”

“So what do you need if you want to come here and learn?”

“Just some sun-cream and a pair of sunglasses, it’s that simple,” he laughs. “Mainly the sun-cream! We have it all here, Kites, boards, wet-suits and we even have our own apartments for people to stay. If you want something a little more private then we have special arrangements with the local B&B’s, all of which are very good. You can be a beginner who wants to have a course of lessons or a tourist hitching round Italy and fancy a bit of surfing for a day, no problem, we can sort you out.”

“So, tell me, how did the race go this year? Do you organise it all?”

“Yes, with help from sponsors and the club guys of course. We didn’t have as much wind as we’d have liked on a couple of the days but it was a great battle and amazing to watch…..and we had live GPS coverage of it all this year, we were recording speeds of over 35 knots across to Sicily and back, which is fantastic fun.”

He finishes off his beer and gets up.

“So…ready for your lesson then?”

“35 knots?……on a three-foot plank of wood?…..across the sea with a big kite and some string? Maybe tomorrow Agostino, got a wee problem with my knee at the moment… I’ll call you.”

For more about Kite Surfing in Calabria go to: www.NewKiteZone.it 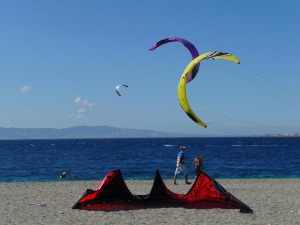