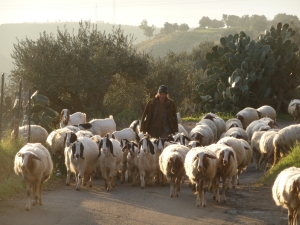 In the foothills of Calabria, even in the high mountains when the weather warms, there is still the wandering shepherd.  His pasture is not fenced or walled, his charges are unmarked.  They graze on verges and banks, slopes and precipices, if there’s no crop in the field then it’s open for lunch.  The man with the crook is a philosopher, a loner – though I know of one who puts on a heavy gold chain in the evening to go looking for a wife.  Where his search takes him I know not.  Marino Mountain is where the edges of the centuries blur, where modern city life meets the old ways, still strong.. still valued.

It was Sunday and I’d planned a long lie then to write a little for the blog and inject some energy into another project which needs a little care and attention.   There I was however, shivering under a naked sky and ringing the doorbell at Zio (uncle) Nino’s.  It was my own fault.  I’d been badgering him to let me help out at ‘l’uccisione del maiale’ for months.  “Don’t forget to let me know now, promise.”  Sure enough, he was true to his word and had phoned late on Saturday night.  “It’s tomorrow, be early.”   I was told.  I don’t have a blood lust or anything, far from it, but I was keen to witness this aspect of life that has survived the onslaught of white-goods convenience.  Indeed, has been the essence of survival for so many in meagre times…..The killing of the pig.  During the 19th century and the first part of  the 20th, it defined how a family would live for the following year, whether they would stay together or whether the young men would be forced to pack their Panini and join the exodus to Northern Europe or the New World to look for work.  Today it still has its place and it’s appropriate that it should be as much a celebration as a harvest thanksgiving.  There was no answer to the bell, so I ventured round to the rear of the house.  I could hear the excited voices at the back of the long garden, across the rows of vegetables and through olive grove to the outhouses where the animals were kept, my shoes getting damp on the dewy grass.   “Hey Carlo.  Just in time!  Zia (aunt) is getting some refreshments so we can start.”  They were all there, about fourteen in all,  Nino’s offspring with their spouses.  A space had been cleared between the storerooms, the pig pens and chicken runs and a sturdy table was being scrubbed down with boiling water which came from a huge steaming vat that hung over an open fire beside the bread kiln.  Diego urged me to look inside the nearest storeroom to the fire where I was happily warming myself.  “This is where we become butchers and prepare the meat for the Salumi, pancetta, sausages and hams.  Nothing goes to waste, everything is preserved.”  A shaft of sunlight suddenly penetrated the gloom, picked out in the smoke that drifted in from the fire.  Above me were rows and rows of last year’s harvest.  Salumi preserved with seasoning, garlic, chilli and rosemary, large hams peppered with, well, peppercorns and rubbed in rough salt.  As I snapped with the camera there was a chorus of cheers outside as Zia brought our ‘starters’.  We were given glasses with clear grappa and slices of homemade bread smothered in chilli and olive oil.  The instant heat from the grappa followed by the smouldering burn of the chilli seemed to relax our muscles for the task ahead.   Amazing as it may sound, just as the pig was being led to its fate that morning, we were distracted by a sound in the neighbouring pens.  A new lamb was born!  This was a good sign, The day would go well….the year even better.

I won’t describe the bloody details, the sounds and emotions, the heaving of 200 kilos for a morning shave, nor the day of intense work that lasted into the dark hours.  That is for another place and time.  All through the process we were supplied with rich red wine and small cuts of pork that were thrown on the fire to cook to keep us going.   Rich, delicate meat that melted in the mouth.   The women seemed to work harder than the men, cleaning intestines for the salumi skin, slow-boiling the ears, tongue, trotters and neck for a lunch of sweet-tasting “Frittole.”   A delicacy that you can feel cling to your heart as you eat.  This is mid-winter and the time for food that insulates you against the wind and snows of the high mountains.   As lunch approached the younger members of the family began to appear until the massive kitchen was packed with sounds and laughter…all anticipating the feast.  There must have been over 30 people bustling around laying tables and playing games, doing homework and watching football.   Nino, Pepe, Angelo, Ciccio, Umberto and I sat close to the log fire with our glasses of grappa, gazing into the embers while Nino dropped a few pieces of liver onto a wire tray, an appetiser for the men.   After lunch, again round the fire, we talked of hunting and fishing and dreamed of a big trip to Scotland for the grouse.   “You know they burn the earth in their fires in Scotland.” Said Angelo to Nino.  “No way!”  “Si, and they call it Pietro.”  Zio looked at me for confirmation.  “It’s called peat.”  I explained.  “It’s a compressed vegetation that makes a good fire….and good whisky.”  “Mmmm.” Said Nino getting up.  “Think it’s time we taste some Scotland.”

After another fire-warmed whisky, Angelo and I went outside to get some air.  The afternoon was tired and the sun was low, a soft haze had turned the colour of the valley to muted olive and purple shadows, the sky was streaked yellow and pink against the powder blue.  The peal of a bell carried across the rarefied air from a hidden church further up the gorge while a spiral of thin smoke hung against the mountain, adding to the dreamlike quality of the vista.   I must have done something good in my life to deserve this moment, nothing could make this better.   As if on cue, the clink clang of another bell caught my attention.  “This is not really happening.”  I thought.   From round the corner of the lane further down, from between the giant cactus plants emerged a tall thin figure, wading slowly forward in the midst of a flock of about twenty sheep.  The sun and the shadows cast an unearthly aura around the group as they approached, floating through the mist.  He barked at the two busy border collies that were keeping the procession in line.  As he got near I tried to guess the age of this mystical shepherd, it was well-nigh impossible.  He could have been anywhere between thirty-five and eighty-five.  His clothes were tough corduroy and tweed, he wore strong boots that had managed to shape to his feet over impossible miles and a small woolly ski-hat that hid all but the long twisting ends of  his reddish-grey hair.   He stopped to talk to Angelo, instructing the dogs to hold his flock.   His long face was chiselled from mahogany, deep carved lines spread like a dried delta from his sun-narrowed eyes, so you would never tell what he was really thinking.  A ragged roll-up followed the movement of his lower lip as he spoke.   He and Angelo exchanged greetings, chattering in thick dialect that bore no resemblance to any Italian I could understand.  The tall man looked over at me at one point in the conversation and let out a short throaty laugh, showing a sparse line of random teeth.  He shook my hand and bade goodbye, barking once again at his faithful team.  If his face bore the lines of age his stride was that of a vigorous young man as caught up with the flock.   “He asked me where you were from.”  Said Angelo.  “When I told him you were Scottish  he said you must know all about sheep then.”

I watched him whistle his way on up the hill, keeping the sheep clear of a car on the corner.  The centuries brushing lightly against each other on the slopes of Marino Mountain.