Sometimes it rains in Reggio

The oval ball bounced unexpectedly into the arms of the Argentine ex-pro, the best player in the side.  He gathered his prize deep inside his own half and broke at such speed that he found himself isolated as he headed for the gain line.  Like a wildebeest on the Serengeti, he made a brave and desperate bid to escape the chasing pack of overweight lions who snapped at his heels and clung onto his back, till fatigue and greater numbers eventually brought him down.   He wailed one last time as his knees gave way and his forlorn struggle was ended, so near yet so far.   Meanwhile the rest of the herd grazed, unperturbed by his plight, at the other end of the plain.

“Where were you guys?”

The ground, it’s true, was hard – not the soft, deep mud of Kent that you can drown in while someone finds a foothold on your back.   The ambulance turned up twice to cart shattered limbs to the nearest hospital.  I was watching the local rugby team in action in the company, oddly, of a Belfast lad and his Dublin lass.  There’s a small ex-pat group who we’ve recently met and enjoyed a drink or two with.   Not, I’m happy to say, anyone who wants to turn Reggio into some little home from home but who’ve settled here for much the same reasons as us, love.  We all have our own Calabrese friends and social groups, but now and then it’s nice to hear an Irish joke again.  The bruised players retired to the changing rooms for the after-match pasta and wine (no beer and bawdy songs here) while Steven and I hung around at the side of the pitch pretending to talk about serious things.  We both knew the unspoken truth.  We were really waiting for the couple of kids who were mucking about with the ball to edge close enough for us to take a catch and pass it to each other.  Catch a memory or two. 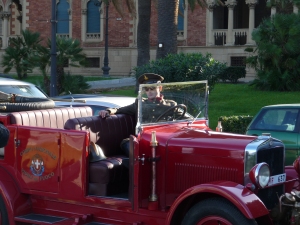 Been waiting years for a fire here!

The north of Italy, like most of Europe, has ground to a halt in the big freeze.  The central belt and the south worries about the rain that threatens such ancient sites as Pompei, while here in the deep south we sit outside in our shirt sleeves on a warm evening.  What a difference a two-hour flight from Gatwick can make… if there was one.  The smug smile is soon wiped from my face however when I overhear……     “This is earthquake weather we’re having.  Bound to be one soon.”

“Excuse me, did I hear you correctly?  Earthquake weather?”

“Oh yes, when it’s this warm in December you can be sure we’ll have a tremor or two.”

I’d been missing the sight of my breath materialising in the cold air and the soft white flakes that make it feel something like Christmas for entirely different reasons, but now I was getting positively misty-eyed for a bit of seasonal weather.  Christmas is different here, closer perhaps to the intended meaning of peace and goodwill, but I do confess to missing a little of the commercial over-indulgence, the bustle and slush of home and of course, my family.   I’ve even missed complaining about the frozen tracks and colder trains…for a second or two.

“Have you got a good strong table at home?”  They asked.  “To take cover under.”  I don’t know about the table but I’m now hoping that our slight overspend on the house foundations is going to pay dividends, I just wasn’t expecting it to be this soon!

I had been surprised by the depth of the foundation trenches Santo (our builder) had dug to support our new balcony and astonished by the amount of concrete that managed to spill into them. 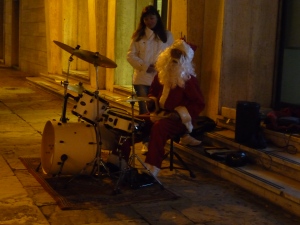 Ever wondered what Santa does to earn a euro?

“Why do we need so much Santo?”

“In case of earthquakes of course.”  He replied, looking at me as if I was completely stupid.

“Erm, how often do these happen then?”

“Serious ones?  Oh about every hundred years or so.”

“Let me think, well I guess about a hundred years ago.  But don’t worry about it, nothing to worry about with these foundations.”  He patted me on the back and smiled before tipping another load of cement around the cage of steel reinforcements.

This was the first mention of ‘Santo’s Clause’, the ‘don’t-worry-about-it’ clause.  It wasn’t to be the last.  The digging had revealed all sorts of unexpected treasures, including old rotting pipes and altogether more healthy-looking tree roots.  There was no doubt that we had to replace the pipes but the roots required a little more lateral thinking.  We’d already had to sacrifice the pomegranate tree for the (external) staircase and weren’t about to lose the mandarin if it could be avoided.   After a little head scratching and confused interpretation, we struck upon the idea of extending the balcony another meter outwards so that the supporting columns would be clear of the tree’s root system and the walls clear of most of the branches.   I wasn’t complaining.  It would make the balcony even more like the extra room I’d imagined, a real dawn-to-dusk suntrap.   I have visions of sitting on a Moroccan sofa, working at a little rustic table under a potted palm with my pot of espresso or an iced jug of garden-fresh orange juice by my side.  Perhaps to lie back in the evening with my guitar and a Bloody Mary, to gaze at the stars before bed.

“How much will this cost Santo.” I asked, trying to turn the sound down on my dream.  “Don’t worry about it, no problema.”  He said, walking away to start up the cement mixer again.  As each day passed a new idea or problem cropped up.  With the new-found space on the balcony it meant we could extend the bathroom out another meter.   A heated argument broke out between me and Santo for a day or two.   He wanted the roof line to follow the balcony, I wanted it to follow the walls…it would allow more sunlight and look more interesting.  I won and Santo went into a huff for a week.  On every job it seemed that Santo asked Toto, Toto asked Maria, Maria asked me.  I looked and measured and answered Maria, Maria told Toto and Toto replied to Santo, each step in the process opening up another possibility for misinterpretation and vague instruction.   Eventually he came round and started boasting about how his plan to change the roof line had been the right one.  “Look how beautiful it’s going to look, you should listen to me more often.”

His and Her's. Park where you want darling!

Every night I returned from work something new had appeared and I was getting anxious that none had been in the original quote.  “Can we please sit down with Santo before anything else is decided when we’re out at work.”  I pleaded.   “Santo says don’t worry.”  The family responded.   I was also becoming aware that every time I wanted to check on the extra costs, Santo suddenly had something important to see to elsewhere.  There was no doubt that the place was going to look special and I was pleased with the quality of the work but Santo’s increased absence and the additional workforce taking his place was beginning to sound alarm bells in our wallet.  “Don’t worry about it.” Said his men.  We’re really pleased with it, relax more, have a beer.”  Santo’s Clause again.

The work finished (on stage 1) on the day of St. Martino, followed by the bill two days later.  I recovered from the shock two days after that.   We’d been in no doubt that it was going to cost more and were glad that we’d had the foresight to keep a reserve when we’d accepted the original quote.  Sure, the work has progressed further than we’d planned for the first stage but it means that the next steps (like putting in the windows and doors) will have to wait a little longer.  However, we can relax in the knowledge that we have a more efficient drainage system than the London Underground, for less annual rainfall than an Argyll bank holiday.   Just as long as we don’t have to test it in any earthquakes.   The cost has still been unbelievably low but I’m older and wiser now, old enough not to believe in Santo’s Clause.