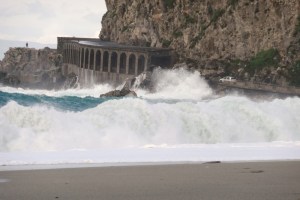 The Calabrese are a tolerant lot, they’ve tolerated me for the last eight months after all.  Tolerated my bad Italian and put up with me writing things about them..so far.  They don’t let themselves get wound up over things.  Rather than jumping about looking for someone to pin the blame on for the recent travel crisis they just gave a sort of national shrug,  “volcanoes happen” they said, rather a lot of them here actually.  Of course they argue, passionately, but there’s no bile attached no feelings of having to break something or someone.  They would happily argue about the colour of a chameleon crossing a tartan rug, but the key word here is “happily.”

I put these low stress levels  (in one of the poorest parts of the country mind you) down as one of the main reasons why life expectancy is here is a lot longer than the three score and ten amen.  That and, of course, plenty of fresh fruit and vegetables real fresh you understand, not supermarket fresh.  There’s a small town we passed through recently, between Tropea and Nicotera, where an octogenarian is considered to be a young scallywag.  Imagine;  gangs of delinquent eighty-somethings roaming the town on their zimmers, high on prescription drugs, looking for trouble and gate-crashing domino parties just for laughs.  Spray-painting “Great grandfathers rule OK”….scary.   Deaths in the region are announced not in the press but locally on special notice-boards strategically placed round the town.  Just a glance reveals some incredible ages.  Some even just have an estimate against their name.

“I’m telling you he was ninety-six!”

“Rubbish, you’re losing your memory, he was ninety-nine if he was a day.  He was in the class above me at school.”

“When were you ever at school?  We didn’t have them in those days!”

You see, those arguments again.

One Sunday, a few weeks ago, Maria suggested we take a drive to Scilla for a coffee and an afternoon stroll.   Scilla is a very beautiful old fishing town about 30 minutes drive to the north and in the summer the beach is one of the most popular places to head for.  On this day however, it was almost deserted.  Dramatic storm-waves were crashing through the short tunnel under the castle between the  beach and the old town.  The only people around were the restaurant owners on the sea-front, sweeping the washed-up sand out of their properties and onto the beach where it belonged, while the sea seethed and hissed it back up to their doorways again.  In the old fishing quarter there were only a few scavenging cats circling an overturned bin.  We stood on the sea wall for a while and let the wind blow our post-lunch drowsiness away before getting back in the car to make our way gingerly up the old narrow streets to the main town on the rock-face high above us.

We parked in the Piazza outside the church and walked over to the balustrade to look back down on the beach below us.  There were a handful of the town elders sitting on the benches round the square, gossiping and joking with each other while a sole barista leaned on the door frame of his empty café, having a smoke.  Maria had started taking photos, trying to get a decent shot of the castle with me in the foreground  looking thoughtfully out to sea, trying not to laugh, when one of the old men walked slowly over to join us.

“Your husband doesn’t need to take a picture of you” he said to Maria. “How could a man forget such a beautiful woman, your face will always be in his memory.”

“Where are you from? Are you from Calabria?” still addressing Maria, “I can tell your man is not.”

“Ah, did he come all this way to find you?  A man should travel a long way in his search for a beautiful girl.”

Maria, obviously flattered, felt that then would be a good time to go over and offer the barista in the café some brief employment, before she found herself getting too embarrassed.   She smiled and politely bade farewell to our companion, thanking him for his kind words as we crossed the square to order our drinks.   Half an hour later we’d paid for our coffees and were about to get back into the car when, out of nowhere, our friend appeared once again.  By then I had the sneaking suspicion that if Maria had been alone, he’d have tried his luck.  But he smiled and shook my hand and, still grasping firmly, started reciting a poem he said he’d just written.   It was in local dialect and told the story of a foreign traveller who happened upon a village in Calabria and saw a beautiful dark-haired girl gathering water from the town well.  He immediately fell under her spell but watched from afar till he had the courage to ask the father for the girl’s hand in marriage.   Now, I’m not superstitious but let me just say I was glad when the story ended with a “happy ever after”.  He was still grasping my hand and I had the strange notion that he was seeing a little more than he was letting on.  “Nonsense, he’s just an old man with a poetic soul.” I reasoned.   As Maria was climbing back into the car he turned to me and, sideways to my ear, he confided,

“There’s a woman I am chasing.  She’s not the most attractive woman, but her mother has much money and hasn’t been well lately.”  He winked and gave my arm a tight squeeze as I got into the car.

“Don’t you start chatting up young girls when you retire” warned Maria as we drove off.  “Definitely no poems, am I understood?”

Even as we left I could see him in the mirror, waving and smiling as he walked over to his buddies on the Piazza bench.  I hoped then that I came here in enough time to grow old disgracefully.

Time waits for no one, but here it would seem to last a little longer…  especially for the old men by the sea.

(Note; Please listen to “Time Waits For No-one” by Alan Stewart via my LINKS page.  Seems to fit!)