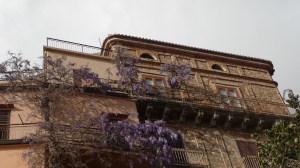 Palm Sunday and , oddly, election day in Italy.  We were in Tropea with Roberto and Arianna, having some lunch in the main square.  It was quiet, too quiet.  At least it was for Arianna and Maria who have secretly been looking forward to some shopping but, being a summer tourist town, the season hasn’t kicked in yet.   Today everything is closed, except the camera shutter.  So we sit, eat arancini and enjoy a carafe of local red wine straight from the cask for a couple of euros.  (Three or four cafes and bars were open for locals).  We wander around for an hour or so and shoot side streets and squares, balconies and the ancient Benedictine church on the Isola with its (closed) underwater caves.  We arrive at the Duomo Square.  Strangely, considering  the day, on either side of the entrance door to the church are two unexploded war-time bombs and, on the outside of the building, an old stencil.  An old political promotion for  Il Duce himself.  On a day that one of the founding nations  of democracy was going to ballot, a 70-year-old, unsullied effigy of Mussolini still looked down on the church square.  The past lives with the present here.   The menus are translated into German, the few tourists we’ve seen are American.

“Any chance we can drop in to see my sister on the way back” asks Roberto as we stroll back to the car.

“Where does she live?”

“Oh, a small town we passed through to get here.  Nicotera.”

Leaving pretty Tropea to prepare for its seasonal invasion, we drop back down the steep, spiralling road into the lowlands for a few kilometres before climbing back up again into a busy town perched on a granite outcrop that marks the northern boundary of the Calabrian plains.  Just outside the main town live Silvana, her husband and her two energetic children.

When I meet new people I tend to get a little shy of my shamefully basic Italian so, after the usual polite introductions, I quietly retreated from the chit-chat to the kitchen balcony which looks very inviting.  I passed a few familiar looking paintings but, as I have to admit to being more interested in the prospect panorama, I paid them scant attention.  I had only been admiring the balcony view for a moment when Roberto’s brother-in-law, Massimiliano, joined me.

“What do you think of the view?  He asked in excellent English.  “If you look across the plains you can just make out the ships in the port of Gioia Tauro, see how they seem to float across the land as they crawl up river.  Over to the right is the old city of Nicotera, it has a long and interesting history.  Goes back to 500 A.D.  Do you see the church in the middle of the town?”

We were looking down and across to the old town and a jumbled mass of terracotta roofs and stone walls.

He continued.  “ It’s built on a thousand-year-old Dominican, how do you say? Ah, yes a monastery.  You can still see the catacombs which are now a museum.  And on the other side there is an old town underneath the town you can see now.  It was an old Jewish district, would you like to see?  We can go now if you’re ready.  I promise it is very interesting.”

The family had been getting ready for our excursion as he talked so when we went back inside, everyone  was already waiting at the door.

“Do you like my pictures?” he asked, as he hung an enormous and complicated looking Nikon round his neck and put his jacket on.   “It’s my hobby.  There’s only one that’s really original, in my own style.  For me.”

All round the house were the most amazing oils.  Every wall displayed paintings in the styles of Van Gogh, Picasso and others… all more than good enough to be hanging in their own gallery.  If he’d told me they were recently discovered works, I’d have believed him.   In one corner, in the least prominent position, hung the original Massimiliano.   A hint at the modesty of an undeniable talent, one of many I learned as the afternoon drifted on.

As the eight of us walked up and down and through the town our guide took me under his wing, educating and entertaining.  About photography, history and sociology.   About the past 1,500 years of invasion, general GBH and occupation.  The Greeks ,The Romans, The Saracens, The Northern Hoards, The Dominicans, The Spanish, The Africans and Turks, The Germans and even the gods (Hercules) have been here and lived.   It made me think how us Brits got off a bit lightly over the years.  In between stories, my tutor encouraged me into little angles and crouch into corners to take more educated photos.

“It’s better from here.  Take a look at this.  No, try from this doorway.”

All the time the “family” trotted behind, enjoying his enthusiasm and absorbing more knowledge themselves.  We saw the ancient wooden carving of the crucifixion hung on the church walls, pitted with dry rot and Turkish bullet holes.  We saw the old Jewish town, donated by Frederick 2nd to encourage trade and prosperity.  We saw the balcony in the old square where Garibaldi addressed the people on the eve of the new Italy, The New Republic.  Now a simple ice-cream shop, the building still has the power (if you narrow your eyes a little) to make you see history and romance in the making.

“Is anyone doing anything to preserve all this, all these amazing buildings?” I asked innocently.

Massi  looked sad for a moment.  “I would like to thank you for giving me the reason to come back here with my camera.” he said.  “It’s been years since I appreciated what was on my doorstep.  The sorrow is that no one has the vision to see what you and I can see.  There is so much to keep but no will or money to keep it.”

“If only more people knew about it”  I said.  “Most of our older history was pulled down and shortbread-tinned years ago.  Here even tiny houses occupied a thousand years ago still stand.  It should be preserved as long as possible… somehow.”

With the children’s legs tired and the camera battery exhausted, we got back in the cars and headed down into the beach town area with it square, new-town layout for the “best ice cream in Calabria”.  High above us the old looked down on the new, its nose in the air.  We talked a while about politics and the Italian way.

“We need enterprising, open minds like your people.” said Massi.  “We are too content to let what happens happen.  Maybe we’ve been invaded so many times we are used to someone else telling us what to do.”

I tried to point out the odd thing or two that Italy has brought to civilisation….Puccini, Columbus, Michelangelo, De Vinci, not to mention small essentials like roads, democracy and public sanitation.

“Don’t be in a hurry to turn things over to Pizza Express and Sainsbury’s.”  I suggested.  “There’s a reason why people like us love Italy.”

So many of the people I meet are self-depreciating and reluctant to eulogize about their nation, pointing  out instead it’s failings and problems to outsiders .  No bragging, not even about four World Cups, except possibly to the French – so I hope they don’t mind if I do a bit of bragging for them in the blog.   Two things to start for sure, their warmth and generosity.

Massi and Silvana waved us off with an invitation to return soon and see more of Calabria’s hidden secrets.

“He knows the places” Roberto assured me as we drove off.  “You should call him”.

The sun was low as we made our way through town, skirting the voters returning from their ever-hopeful chore.  The day didn’t change things in Rome.  Sometimes  it’s just as well.

3 thoughts on “Welcoming the Invaders.”